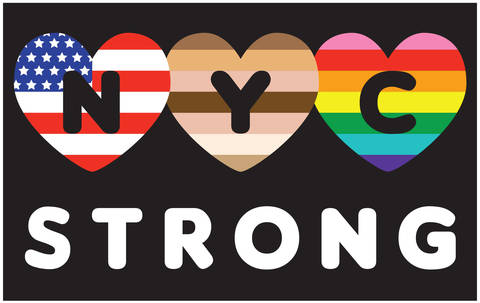 EDISON, NJ– Edison homeowner, Karen Schoenfeld, was picked out of more than 1,200 submissions to represent her flag art work for ‘The Flag Project' at Manhattan's Rockefeller Center.

‘The Flag Project' is a new exhibition that was brought to life by 193 artists from worldwide. Out of the 193 selected, 19 are New Jersey citizens. The art installation likewise includes work by New York residents, in addition to those from Toronto, Houston, and Buenos Aires.

Our newsletter provides the regional news that you can rely on.

You have effectively registered for the TAPinto Edison Newsletter.

Born and raised in the Hudson Valley, Schoenfeld discovered the contest through social networks. She is a Pratt Institute graduate who earned a Bachelor of Fine Arts degree in arts and photography and currently works as a senior product designer in NYC.

Schoenfeld, a Designer, has remained in the market for 30 years and stays updated with trends globally and within fashion. She pulled from her innovative background to design a flag motivated by current occasions, such as COVID-19 and police brutality that triggered protests.

“I wanted my flag to represent unity, regard, and love in a trying time. We should come together as a country; white, yellow, brown, directly, gay, democrat, republican politician, old and young since we are Americans,” Schoenfeld stated. “In the end, love does win.”

Schoenfeld stated she is thrilled to be representing the state of New Jersey and New York in this as soon as of a lifetime chance.

“It makes me feel happy, and it fills my heart with happiness to be a part of this historical minute,” Schoenfeld said.

The Flag Project will be on display at The Rink at Rockefeller Center until August 23rd.